We’ve unsealed the seven seals and heard the blasts of the seven trumpets and now we watch as the seven bowls of God’s wrath are poured out on the earth.  As I read this, I am reminded of the US invasion of Iraq in 2003 with a military offensive that was termed “Shock and Awe.”  The idea was that the attack would come so fast, and be so overwhelming, and so debilitate the enemy that they would be unable to stand against the US.  I remember watching on a tv in my OC dorm room as the bombs fell and the military raced towards Baghdad.  I couldn’t stop watching for days and slept little, watching round the clock coverage.  While I know many have strong opinions about the Iraq War, my intent is not to comment on the motives or execution of that war, but rather to comment on how the horrible and overwhelming force demonstrated in those days doesn’t come close to the images here in Revelation 16.

The time for warnings has passed and now God pours out his wrath on the earth to punish those who bear the mark of the beast.  The horrors again echo the plagues on Egypt with darkness, hail, storms, water turned to blood, and more.  It is devastating.  However, it is also reminiscent of the Creation with judgments affecting the water, the land, the skies, the sun, the darkness, and humanity.  It is complete and utter destruction of everything.  And on top of everything, these plagues are not coming one at a time as in Exodus, but seem to be piling on top of one another bringing exponentially horrific suffering.

And at several intervals throughout this terrible judgment, the angels stop the work of pouring out wrath to praise God and commend him for his righteous justice that is being brought upon the earth.  This is hard to imagine for people like me who live in a clean, orderly, society without violent oppressors.  But when you live in a corrupt world where the powerful bring pain to the powerless and the faithful are persecuted, you understand the need for God to cleanse the earth.  You pray daily for God to put things back the way they belong.  So when God brings this wrath upon the two beasts, sent by the Dragon, there is praise from the angels and rejoicing from the saints.  God is right.  God is good.  God takes care of his creatures and his creation, even when it means cleaning up his creation from some of his creatures.

The final bowls are setting up a great battle and even mention the battlefield Armageddon.  Some believe that this will someday be the location of a huge end-of-time battle.  However, when we get to this battle later, even though armies gather on both sides of the battle field, only Jesus fights.  This isn’t a battle between humans.  This is a battle between Jesus and the enemies of his people to restore order to the creation and justice for God’s people.

To those who stand opposed to God and persecute his people…you are on notice.  God will bring justice.  God wins.  Pick a side.  Don’t be stupid. 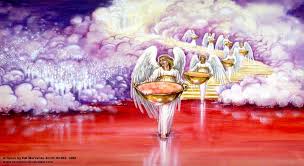 A great audience has gathered, the victors over the beast are ready to see God’s justice done.  We are told of angels and of the plagues.  It is clear that this is all being done with God’s authority and is being done with full intention.  It is not an accident.  The judgment of God is about to be poured out on Rome, the representative of Satan in this world at that time.  The time for warnings has come and gone.  They were ignored and now the full judgment comes on the beasts and those who worshiped the beast.

It’s important to note that God’s people are to be safe and protected while God’s wrath is poured out on those who have opposed him.  God’s people need not fear, in fact we will soon find them praising God and rejoicing to see his righteousness being spread out over the world.

Welcome to the beginning of the end of the book! Well…sort of. This is the beginning of the center of the book that builds towards the end. It is hard to lay out a definite structure to the book because each section is deeply connected to its surrounding context. Trying to break the book down into major and minor sections always proves hard to uphold because the book as a whole flows well from one section to another. Revelation can be broken down into basic themes but I’d stray away from any rigid organization of the book. Chapter 6 flows naturally from chapter 5 where Christ is the one who is “worthy” to open the seals. This transition begins the central section of the book – the seals, trumpets, and bowls.

The first four seals center on the depravity of mankind. The progression of the horsemen goes from conquest (the first seal) to civil war (the second seal) to famine (the third seal) to pestilence and death (the fourth seal). This is the natural progression of man’s inhumanity to man. Simply put, God allows human sin to come full circle, turn upon itself, and self-destruct.

The cosmic scene in the next two seals to come follows the four horsemen. The fifth seal moves from the devastation of the earthly scene caused by total depravity and focuses on the heavenly scene of the martyred saints who cry out for vindication and vengeance for the torment that has come on them from their oppressors. In the first four seals the sinners destroy themselves while the next three seals (the seventh being in chapter 8) the saints have been destroyed by the sinners. The focus of these chapters is quick to point out that the plea for vindication is quickly answered. When going through persecution, keep your faith because vindication will come.

At the end of this chapter there is a great scene where everyone goes into hiding trying to try and flee from the wrath that is coming. There are two mindsets in which to read this chapter and the wrath that is to come. You can read it in fear because you have been worshiping the wrong god and wrath is coming or you can read it with hope knowing that vindication is coming to the righteous who have been oppressed. One of my mentors summed up the Book of Revelation as this, “God wins! Pick a side. Don’t be stupid.” Depending on which side you stand determines whether or not this is a book of hope or a book of fear. Take heart! God is greater than those who oppress! Vindication is coming!

Posted by Ryan Russell on May 29, 2013 in Bible Blog, Revelation