It is a common lament of mine that the Christians around me aren’t as humble as I am. If they were more humble, like myself, we would have a more righteous church. Whenever New Years comes along people begin looking at themselves for what they can resolve to change. I like to spend this time helping people realize the changes they need to make in their lives to be better people. I don’t actually make resolutions myself; I help other’s see what needs to change in them. I’m just doing my part to help create a better world. Hopefully you realize that I’ve said all of this in jest.

James continues into chapter 4 in the theme of humility. Those who are truly wise are characterized by humility (3:13); it is the position for receiving God’s grace (4:6); and in the description of repentance, it is required (4:10). The opposite of humility is implied in the question immediately preceding in 4:11-12, “But you – who are you to judge your neighbor?” It is quite natural for James to transition from the call to humility and confront the problem of arrogance. 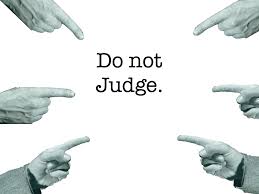 “Judging” has become a hot topic in our culture. We have developed an idea that to not judge someone is to never disagree with what they are doing. This mindset really puts James in quite the conundrum. “Anyone who speaks against his brother or judges him speaks against the law and judges it.” Isn’t James judging them and therefore contradicting himself at the same time? He is…if we have a poor understanding of what it means to judge. There is a difference between judging someone based on an evaluation of Biblical standards of conduct (are they in the image of Christ) and forming a negative, and usually self-righteous, opinion about someone because they do not measure up to these standards, or because we simply don’t agree with what they are doing. It would be an unfortunate misunderstanding of this passage to read it and assume that when we see a Brother or Sister not living up to the image of Christ that we shouldn’t lovingly confront them. There is a level of humility that has to be there to do that.

There is one God and judge of all who is able to save and destroy…you are not God. Never take on the position of God and bring condemnation on others. It is warranted to point them back to the way they should be living but we need to be careful in how we approach these situations. In short…we need, in every way, to be humble in all we say and do.

Humility is an elusive virtue. As soon as you realize you have it, pride sets in. We often associate humility with downplaying yourself and thinking less of yourself. When it comes to boasting about tomorrow…we like to talk ourselves up about the things we will do. I remember reading these verses and thinking that we always had to say, “if it is the Lord’s will” or we are going about life wrong. I look back over my life and there are lots of things that have not gone like I projected they would. I’ve loosened up my grip a bit on my future and have allowed my plans to change. I never intended on being back in this part of the country but God has blessed me greatly through the changes He has brought to my life. I’ve had to swallow my pride at times and be humbled. I hold my plans a lot more loosely now but I still have room to grow in humility. The overall question that needs to be asked at the end of this chapter is, what does humility look like? C.S. Lewis captures powerfully what humility looks like in Mere Christianity:

To even get near [humility], even for a moment, is like a drink of cold water to a man in a desert.

Do not imagine that if you meet a really humble man he will be what most people call “humble” nowadays: he will not be a sort of greasy, smarmy person, who is always telling you that, of course, he is nobody.

Probably all you will think about him is that he seemed a cheerful, intelligent chap who took a real interest in what you said to him.

Posted by Ryan Russell on February 27, 2013 in Bible Blog, James