How incredible would it be to have lived in the time when God was speaking to prophets, leading Israel in a pillar of fire, and working powerful miracles against the gods of Egypt? What would it be like to love in the time of Jesus, walking with the disciples, seeing Jesus heal the sick, raise the dead, and feed the multitudes? Would we get out of the boat like Peter did? Would we bring a small boy with some fish and bread forward like Andrew to see what Jesus would do with so little? How powerful would it be to hear the words of Jesus from his own lips?! When would be the best time to live: Before Jesus, with Jesus, or after Jesus?

Jesus tells his disciples that it is better that he leaves so that the Advocate will come to them. Jesus has a very high view of the Holy Spirit. The Holy Spirit will guide us into all truth. Because the Spirit has come they will have strength to not fall away when they are put out of the synagogue or when people try to kill them. The reality of the Holy Spirit being inside of us is that God is within us. God was with Israel by placing his presence in the Temple. God was with Jesus by placing his Spirit on him. We receive this same Spirit when we are baptized. We no longer have to go to where God is because he has come to us. This reuniting with his creation is a small sample of the reality of us being with him in the New Creation after the resurrection.

A time is coming when the disciples will be alone. Scared. Rejected by the world. Scattered. It is going to be excruciatingly painful for a while but that pain will be a distant memory when their grief is turned to joy and the Holy Spirit is placed within them. They will then be in the new reality of God being with his people again anticipating the time when that reality will be fully realized in the resurrection of the Saints. Christ has conquered death. He has overcome the world. Take comfort in this reality. Even though the world may be celebrating the death of God, as Nietzsche in the 19th century famously claimed, “God is dead,” we know that this is not the reality. Things may look grim at times but take heart! Christ has overcome the world!

As Peter returns to the topic of persecution, he seems to do so with awareness that tougher and more intense persecution is coming for the church.  This discussion occurs at both the beginning and end of this chapter.  When you suffer, take on the attitude of Christ Jesus.  Later Peter says that we shouldn’t be surprised by our

struggles, but instead should recognize that Jesus suffered and certainly his followers will share in his suffering, so rejoice that you are found worthy of sharing.  If you suffer, consider yourself blessed.  Don’t feel like you are being punished for something like a criminal, but recognize that your suffering is not shameful but honorable.  As such, when you suffer you should be drawn to a greater commitment, rather than being drawn away from God.

Peter’s argument here is a tricky one.  If you’ve ever heard somebody tell a teenage girl, “If he’s being really mean to you it means he actually really likes you.”  That could be true.  Or, perhaps somebody needs to tell her, “He’s mean and he’s just not interested in you.”  Now, I am not in any way trying to draw a parallel between God and suffering in the world and teen romance.  I am trying to show a similarity in the logic Peter is using here.  If you suffer, it’s because God finds you worthy so you should celebrate.  It’s a little bit (or a lot) counter-intuitive.  So what’s Peter doing here?

I’m reminded of a round table discussion I was a part of some years back at a youth ministry conference.  The topic was something like “Dealing with Complaints in Your Ministry.”  The guy leading it started out by discussing how we all assumed that if we are running an effective Bible-based youth ministry that we would not have dissension.    He then asked the group, “How many of you are perfect?”  Nobody.  “Has there ever been a perfect ministry leader, or even person?”  We knew this one…Jesus, of course.  “And what did they do to him?”  We all had to stop for a moment as we remembered that he was arrested, tried, flogged, and executed and we tried to find a way to say that.  Into the silence, the leader simply said, “So if Jesus was perfect and they killed him, why do you think they will like you?”

Peter’s doing a similar thing here in the text, and it’s really important.  Just like all of the ministers at that round table thought that if we did things right everybody would like us, the ancient world believed that if God is pleased with you, then you will be blessed.  This is dangerous logic for a people who are about to undergo radical persecution, so Peter has to make sure that they aren’t shamed by their suffering.  He reminds them that Jesus suffered and so when they suffer they are sharing in that with him.  They aren’t suffering as criminals, but are doing so as God’s blessed people.  In fact, you can even suffer and rejoice.  And when you do suffer, you certainly should not be discouraged in your faith, but should be encouraged.

In the middle of this discourse on how to deal with suffering is a contrast between faithless living and faithful living.  One is characterized by evil, sin, wild living and other junk.  The other is characterized by love, hospitality, and using our gifts for God’s Kingdom.  Live differently than the faithless people of this world.  When you do, you will likely suffer.  Love anyways.  And don’t be discourages because of your suffering or persecution.  Rather, recognize that it is an honor to suffer like your Messiah did, so take on his attitude and grow in your faith through it all.

The author of Hebrews has been working to establish how much “better” the way of Christianity is than the old Judaism.  It’s clear that there is a strong pull within the early church to move back towards the old ways, the ways of Judaism.  Some have left the church entirely and are going back to the sacrifices, priests, and obedience to the law.  Others are simply bringing those with them into the church, which is problematic in and of itself.  Now, in chapter 10, we find two strong arguments seeking to motivate people to stay the course and not look back.

The first argument is that the old sacrifices and rituals happened over and over again because they weren’t complete.  If any one of those sacrifices or rituals ever completely worked, then you obviously wouldn’t have to do it again.  Because it happens regularly, it’s clear that they are partial and temporary.  On the other hand, Jesus died once and was resurrected once for all time.  You were baptized once and your sins were washed away for all time.

Hebrews then gives a specific example.  To the first century Jewish reader they could easily read between the lines and hear something like this: “Remember the Day of Atonement you celebrated every year?  Remember how every year the High Priest cleanses and purifies the Holy of Holies?  And remember how they tied a chord to his foot in case he did any little thing wrong and was struck dead by God while behind the curtain and nobody wanted to go get him so they could pull him out by the rope?  They of course do that because of what happened when fire consumed Nadab and Abihu…you remember that story, right?  Remember how scared even the priest were to go behind the curtain…yeah…that’s what you are going back to.”

On the other hand (vs 19 and following), Christians have the confidence to enter the Most Holy Place!  There is a living way through the curtain since our High Priest takes us into the very throne room of God and we enter it, not with fear and trepidation, but with confidence and full assurance as we DRAW NEAR TO GOD!  We don’t need a Day of Atonement because we have been completely cleansed and atoned for already, once and for all.  Jews were scared to the bone to come near God, but now we draw near to God with confidence and assurance to have a RELATIONSHIP with him!  How could you consider…even consider going back to that?! 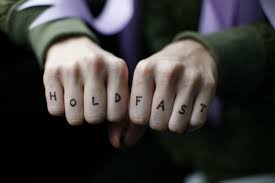 Dear writer of Hebrews, that’s a really good point.  Would you like to add something to that?  Oh you would…

Remember when you first became a Christian and suffered for the name of Christ?  You were mocked, possibly beaten, exiled from family meals, stood beside those in prison (for their faith in Christ), allowed your stuff to be stolen and much more?  Remember that?  You prevailed.  You came through it with your faith intact.  And now you are considering giving it all up….for what?  God will take no pleasure in those who shrink back.

“But we do not belong to those who shrink back and are destroyed, but to those who have faith and are saved.”

Good point Hebrews author.  Can you give me some examples of God’s people who refused to shrink back?  Oh…fine…I’ll wait until next week.  Also, great use of Jeremiah 31 throughout the first part of this chapter.  I see what you did there.

Chapter 1 begins with a greeting from Paul, Silas and Timothy to the believers in Thessaloniki.  He then immediately turns to encouraging those who have been persecuted or undergone trials and struggles because of their faith.  They should take great solace from knowing that God will bring justice to his creation.  While things feel wrong now, Christians can have hope because we know God will make everything right.  This faith and understanding should also inspire God’s people towards greater acts of obedience and belief.

One of the common objections to Christianity today is something along the lines of “How can God claim to be good, and all powerful and reign over a creation that’s so full of evil?”  Paul’s answer in 2 Thessalonians 1 is that God would completely agree with most of that sentiment with the caveat being that he’s waiting to fix it all.  For the time being, he has left his appointed people, Christians, here in his creation as forerunners to begin setting this to rights.  So don’t become discouraged, but instead begin declaring and actively transforming the redemptive work of Christ in all creation, reclaiming this world as God’s and promising with hope and faith that Jesus will eventually return to make things completely in accordance with the Creator God’s will once again.  Until then, persevere, stay hopeful, and keep doing the good work of the Kingdom.

Posted by Kent Brown on October 30, 2012 in 2 Thessalonians, Pauline Epistles