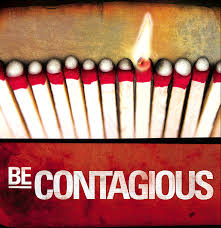 In Jesus’ day there were some people you just didn’t touch.  They were “unclean.”  And if you touched somebody who was unclean then you became unclean.  Their vileness was understood to be contagious.  Much of this was set up the in priestly codes of the Old Testament and was still faithfully practiced in Jesus’ time.  Unclean people couldn’t touch other people or touch food that other people would eat.  Some had to live outside of the city (lepers and dangerous demon possessed madmen).  And certainly none could enter the Temple.  They were outsiders who were locked out of every social group, often with little hope of becoming a fully functioning member of society again.  Others, like a woman on her period, were only unclean for a short time and were then clean again.  That is, unless she bled for years.  You don’t touch pigs or dead people.  They are all unclean.

And there was one thing that all good Jewish people knew, if you touch an unclean person (or sometimes even touch something they touched) then you “caught” their uncleanliness.  It was extremely contagious.  And then you would suffer a short period of being unclean, often a day, before you could be made clean again.

And yet what do we find in Mark 5?  Jesus is in the presence of a demon-possessed madman.  And what’s worse, dangerously close to pigs (most unclean animal ever).  Jesus is touched by a woman who has been bleeding for years, an exile because of her illness, and she is healed.  Jesus goes into the bedroom and touches Jairus’ dead daughter and she wakes up.

In each of these stories, Jesus comes in contact with the unclean.  As a good Jewish teacher, he should have shoo’d them away while turning up his nose and chastising them for not warning him in advance of their unclean state.  He should have run to the nearest wash basin and cleaned his hands just because they were close to him.  After all, that’s how others would have acted.  But not Jesus.  The most striking of these stories has to be the woman.

For 12 years she had been bleeding.  Blood outside of the body was always unclean.  She would have lost everything.  She couldn’t prepare food for others.  She couldn’t hold hands with her family.  Nobody could have embraced her or even gently comforted her during her illness.  She couldn’t go to Temple to worship, even during the festivals when everybody went.  She gave everything she had to try to get better and had only gotten worse.  There was no hope…until she saw Jesus.  Suddenly hope emerges.  Maybe he could heal her and she could have her life back.  But could she risk asking?  What if he refused to touch an unclean woman like every other person had for a decade?  Perhaps she could just touch his outer garment.  He might not even notice.  Of course, if he noticed he might be enraged to find out he had just been made unclean.  But she had nothing left to lose.  She had to try.  She couldn’t let hope pass her by yet again.  And as she pushed through the crowd, making many unclean and frustrated, she reaches out, touches his cloak and feels her body become whole again!  She was healthy!  She could actually live again!

Then she hears his voice yell out, “Who touched me?”  Fear.  Anguish.  Shame.  Could she run?  No.  She had to tell the truth to the man who had given her hope.  He had given her life back.  So she clings to his feet and tells him the truth.

And waits for his response.

“Dear woman, your faith has healed you.  Go in peace.  You are freed from your suffering.”

You see, where the world saw people who were contagiously unclean, Jesus reach out and touched them.  But what is really remarkable is not that Jesus didn’t “catch” their uncleanliness.  What is remarkable is that Jesus was so full of life and goodness and God that when he touched them they “caught” what he had.  They became clean.  He wasn’t just immune to their brokenness, but his contagious goodness and wholeness infected them and healed them.

are contagious.  We might catch what they have.  So we build barriers between ourselves and them.  We live in sterilized worlds where we don’t even come in contact with the unclean.  We are safe.  The problem is that God has put Jesus’ goodness inside of every one of us through his Holy Spirit and he has told us to go touch all of the unclean people so that they can be infected with his contagious goodness that lives in each one of us.  And if we won’t go out and touch them and give them the life found in the contagious Messiah, then they will live for years like Legion, fighting against the chains in the cemetery.  They will be like the woman who gave everything trying to find hope for a decade.  They will be the man who is losing his daughter and doesn’t know where to turn.  They need a contagious Messiah.  And that hope, joy, goodness, life, and salvation lives in us.

Will you take the risk to touch the dirty people and infect them with the love of Christ?