This is an odd chapter to me for several reasons.  First, let’s review what we know about what all is going on around this story.  We know that Jesus was with the Apostles for several years during his ministry.  Jesus, as he predicted, went to Jerusalem and was arrested by the chief priests and religious leaders and handed over to the Romans, who crucified him.  Three days later he was resurrected and shortly after appeared to the women in the Garden and the disciples in the upper room where they were gathered.  Jesus spent some part of 40 days with the disciples and Apostles explaining things to them.  He then ascended to prepare a place for his followers to go.  About 40 days later the Spirit is going to come upon the Apostles with power and they will preach the Gospel in every language and 3,000 will be baptized and begin the church. 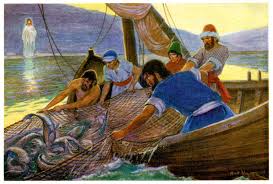 So John 21 falls somewhere in the 40 days between the resurrection and the ascension.  He has already appeared to the disciples twice before (v. 13).  And here is what I find interesting…the Apostles seem to lack any sense of purpose or direction.  It appears that they are sitting around one day and Peter says to a couple of the others, “Well, I don’t know about you guys, but I am going fishing tonight.”  And not just casual vacation fishing; this is occupational catching fish in nets for money fishing.  They aren’t out preaching or teaching.  They aren’t in prayer or even meeting in an upper room any more.  There are only a few of them there.  It seems like they don’t really know what’s next.

There is an interesting thing here that we see in almost every text where Jesus appears to people after his resurrection: they sort of recognize him.  There is always this suggestion that they recognize him and can tell that he is who they know he is, but also an implication that he looks a little different.  Jesus, as the firstborn of among the dead is in his resurrection body and we, as Christians can look forward to our own resurrection body someday.  And what seems to be the case is that we will be different yet recognizable.

It’s also weird to me that Peter puts his outer garment on and then jumps in the water.  Apparently a strong swimmer to swim fully clothed.  I also like that we are told exactly how many fish they caught, which is apparently far beyond what nets can usually hold without breaking.  Perhaps this should be known more as the miracle of the super strong nets.

The story then moves to the three part questioning of Peter’s love for Jesus.  Of course, by the third questioning Peter is hurt.  His best friend and the one who he proclaimed to be the Messiah is questioning his loyalty and love for him.  It’s hard to know if Jesus is showing some undoing of the three denials in way that is getting back at Peter or has some redemptive force.  It’s also possible that Jesus is just really trying to drive home the importance of taking care of the “sheep” or followers of Jesus.

And then, just as we come to the end of that somehow redemptive, somehow commissioning conversation Jesus tells Peter in some cryptic way how he is going to die.  Church tradition holds that Peter was crucified upside down on a cross.  What’s really somewhat humorous is that Peter looks over at the disciple whom Jesus loved (presumably the Apostle John and author of this Gospel), and he asks Jesus, “What about him?”  This is a grown up version of a conversation I have with my toddler children on a fairly consistent basis…”How come I have to _______ while she gets to __________?  That’s not fair.”  Jesus simply responds, “What business is that of yours?”  Good answer Jesus.

Finally, the entire Gospel ends with John stating that this is simply a snapshot of the endless volumes that could be written about all of the things Jesus did and said during his lifetime, which is a pretty powerful conclusion to the book.  On the other hand, it’s almost that John just said, “Well, I guess that’s enough.  I couldn’t ever tell you everything, but that’s enough.”

And on that note…the end.

Posted by Kent Brown on April 23, 2013 in John, Uncategorized