Matthew 11 – A Message We Don’t Want to Hear

“Now when Jesus had finished instructing his twelve disciples…” is in Matthew five times in some kind of variation (7:28; 13:53; 19:1; 26:1), and seem to act as organizational markers for his readers. Continuing the parallels between Jesus and Moses, this could be Matthew’s was of relating his gospel to the five books of Moses. This isn’t something I have studied in much depth but I ran across the idea in my reading and it intrigued me. 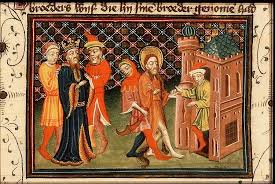 Why is John worried as to whether or not Jesus is actually the Messiah? John and Jesus are both preaching, “Repent, for the kingdom of heaven has come near” but we see in 11:20-24 that many have remained unresponsive and unrepentant to their call. John, being faced with failure because of these unrepentant cities understandably sends his disciples to talk to Jesus.

Another interesting look at what John might be thinking when he sends his disciples to Jesus: He is in prison. Which is an interesting place to be for someone who has paved the way for the Messiah. He’s in prison for holding Herod accountable to the law (14:1-11), but when you look at Jesus’ life and actions it is not clear that Jesus, the would be Messiah, and John have the same understanding of the law. John thought it was necessary to fast regularly (9:14-17) but Jesus does not require his disciples to fast. He has also befriended sinners and tax collectors. It could be possible that John has sent his disciples to double check Jesus because Jesus’ behavior might not look to John as measuring up to the repentance that he preached in the wilderness. John is in need of some reassurance.

Jesus then helps the crowds and John understand who John is. John is a prophet, and a very special one at that. No one really liked prophets because they came with a message from God and that usually meant that you were going to have to change something. They didn’t go to the wilderness to hear John say that they were doing well. John didn’t give the par on the back along with encouraging words that they wanted to hear. John, like the prophets before him, challenged the order of the culture they were speaking to and called them to repentance. This never goes quite well with those who are comfortable with their lives.

This proclamation from John is the same message Jesus embodied. The Kingdom is not an ideal of peace that requires the use of violence to bring it about. The Kingdom is in fact Jesus himself, the one who has the power to overcome violence through love. As Christians today, we are called to embody this Kingdom and this message. People who do not have power are eager to join Jesus but those who have power in this world struggle to accept the full message of Christ. We need to be careful not to point the finger at others here. We are Americans and have all the power in the world. How eager are we really to fully embody the Sermon on the Mount? Love your enemies? It’s tough and doesn’t make much sense really.

After pronouncing judgment on the cities that refuse to repent, Jesus then adds insult to injury by thanking God for hiding the secrets of the Kingdom from the wise and the wicked but revealing it to the infants. He then invites his listeners to take his yoke upon them, “For my yoke is easy, and my burden is light.” While I believe this to honestly be true, I also look back to the yoke of the Sermon on the Mount and I scratch my head a bit about the “easy” and “light” part.

Posted by Ryan Russell on December 17, 2012 in Uncategorized